This study reports on the true prevalence of recurrent implantation failure after three successive frozen euploid single embryo transfers.
Fertility and Sterility
Editorial Office, American Society for Reproductive Medicine
Follow
Like Be the first to like this
1

To study the true prevalence of recurrent implantation failure.

Women (n = 4,429) with anatomically normal uterus who underwent up to three consecutive frozen euploid single embryo transfers (FE-SETs) were included in the study. Cycles with donor eggs or gestational carriers were excluded.

Cumulative outcomes from these cycles were analyzed. A logistic regression model was used to assess the differences of outcomes between first, second, and third FE-SET and a Kaplan-Meier curve as used to analyze cumulative implantation rate.

Our findings suggest that true recurrent implantation failure is rare. For those patients with the ability to make euploid blastocysts, <5% would fail to achieve a clinical pregnancy with three embryos transferred. It remains to be further investigated whether this threshold identifies a truly recalcitrant group or simply a statistical certainty based on random variation.
Read the full text here.
Fertility and Sterility
Editorial Office, American Society for Reproductive Medicine
Follow

This is a very interesting retrospective study.  It suggests endometrial pathology is rarely, if ever, a cause of recurrent implantation failure among the studied population under these protocols, specifically in the context of transfer of single thawed blastocysts with euploid test results in artificially prepared cycles.  The study found no significant increase in failure probability between 2nd and 3rd transfers, an increase that would be expected if their failure history was increasing the chance that they had a sustained or reproducible endometrial pathology.

The study features success rates that seem the current norm for the protocols described (freeze-all, PGT-A with TE biopsy, and single-blastocyst transfer in artificial cycles), adding to its credibility.

Of course, the retrospective nature incurs some limitations.  The causes of patient drop-outs, for example, are not tracked as well as they typically are in prospective studies, and these could alter the effect sizes of subsequent transfers.  In addition, it is unclear if prior failures may have caused some clinicians to adjust the endometrial preparation or luteal support in some subsequent cycles.  If they did, then this might have altered some effects.  The authors speculate that the first transfer resulted in higher success rates than in subsequent attempts because the morphologically best embryo was selected in that first transfer.  This is reasonable speculation, but of course not truly known, and other factors cannot be ruled out.  The lack of difference between the 2nd and 3rd transfers is the key finding here.

I would like to point out a few things.  First, this finding is strictly in the context of frozen-thawed transfer of blastocysts with euploid test results in artificial cycles.  Many centers have shifted away from fresh transfers, and it's easy to forget they still occur.  However, the study leaves open the potential for consistent endometrial effects in fresh transfers that could cause recurrent failure in some patients.  Indeed, if ovarian response to stimulation is related to negative endometrial effects, as some recent literature suggests, then there probably would be consistent endometrial effects because ovarian response tends to have some consistency in repeated cycles in the same patient. In addition, the use of only euploid embryo transfers in the study leaves open the potential for recurrent embryonic effects related to aneuploidy.  Our own center has seen (thankfully rare) patients that reported with recurrent miscarriage following natural conception that had consistently elevated rates of embryo aneuploidy in their IVF cycles.  These patients would very probably have had recurrent implantation failure in IVF if they had not opted for PGT-A.  The study also leaves open the potential for non-recurrent ("random") endometrial effects in thawed embryo transfers that still might cause some implantation failures.

Triggering with 1,500 IU of hCG plus FSH compared to a standard human chorionic gonadotropin trigger dose for oocyte competence in in vitro fertilization cycles: a randomized, double-blinded, controlled noninferiority trial 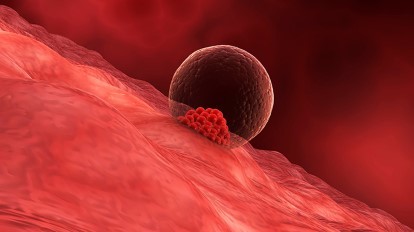