A 33-year-old patient, nullipara at 8 weeks of gestation, with no comorbidity and no previous surgery, was admitted to a spoke hospital for acute abdominal pain. During hospitalization, a transvaginal gynecologic ultrasound revealed pregnancy with ectopic localization. Free pelvic fluid was detected, and a subsequent diagnostic laparoscopy was performed because of worsening symptoms. During the procedure, hemoperitoneum drainage was instituted and American Society of Reproductive Medicine stage III pelvic endometriosis was diagnosed. A round formation approximately 3 cm in diameter was found at the left posterior parametrium (Fig. 1). Due to the pregnancy position and β-human chorionic gonadotropic (β-hCG; 820 mUI /mL) values, conservative treatment was chosen. Thus, methotrexate at 50 mg/m2 body surface area was administered. A second dose of methotrexate was administered seven days after the first one, and the β-hCG increased to 1068 mUI. On day 14 after treatment, the β-hCG was 1053 mUI/mL. Therefore, surgical treatment was chosen, and the patient was transferred to our center. An ultrasound assessment confirmed the ectopic pregnancy with a live fetus in the left posterior parametrium.

The patient underwent operative laparoscopy to remove the ectopic pregnancy. Surgery was performed using a 3-dimensional optical system (TIPCAM 1, S D3-LINK; Karl Storz SE & Co., Tuttlingen, Germany). After drainage of the hemoperitoneum, the gestational sac was identified in the left posterior parametrium. The uterus, tubes, and ovaries showed normal morphology. Pelvic endometriosis was confirmed. After accessing the left pelvic retroperitoneum with the medial and lateral pararectal spaces’ opening and development, ipsilateral ureterolysis was necessary to isolate the parametrial pregnancy in close contact with it. Coagulation and sectioning of the deep uterine veins were essential to control hemostasis. Identification of the left hypogastric nerve, which was partially infiltrated by the chorionic villi, and the pelvic splanchnic nerves, was required to safeguard them (Fig. 2). Subsequently, the surgeon decided to place a ureteral stent to prevent urologic complications.

The laparoscopic approach proved to be safe and feasible to manage parametrial pregnancy.

The pregnancy was removed entirely. The patient was discharged 72 hours after the procedure with an uneventful postoperative course. The histologic report confirmed the diagnosis of parametrial pregnancy on decidualized endometriotic tissue. The β-hCG serum level became negative in 20 days.

Extrauterine pregnancies represent one of the leading causes of maternal death in the first trimester and constitute approximately 1%–2% of total pregnancies. Of these percentages, only 5%–8.3% are nontubal. Cases of abdominal pregnancy are even rarer, estimated at <1%, and among these, according to a recent review, only 20 cases of retroperitoneal pregnancy were described in the literature. The intraoperative finding of multiple endometriotic implants on the parietal peritoneum above the retroperitoneal pregnancy, together with the decidualized endometriosis result of the histologic examination have been considered to explain the pathogenesis of the condition. It is plausible to suppose that endometriosis has represented the access route for the fertilized ovum, which implanted on endometriotic superficial tissue and then moved toward the retroperitoneal vascularized structures. The diagnosis and treatment are challenging for the gynecologist. Medical treatment is a valid approach to uninterrupted early ectopic pregnancies; however, symptomatic patients' medical therapy failure is one indication for a surgical procedure. The laparoscopic method is optimal, especially in cases like the reported one, in which minimally-invasive techniques allowed complete removal of the pregnancy, respecting the anatomic structures of the retroperitoneum using nerve-sparing techniques. Furthermore, it ensured a safe ureteral stent placement without imaging. The laparoscopic surgical approach can be a safe and feasible option. It allows an early discharge, with a minimum risk of dysfunctional complications, and improves life quality compared to more destructive interventions. In conclusion, to control vascular, nervous, and urinary tract structures, surgical treatment should be based on anatomic knowledge of retroperitoneal anatomy to guarantee the best surgical outcome.
Read the full text here.
Fertility and Sterility
Editorial Office, American Society for Reproductive Medicine
Follow 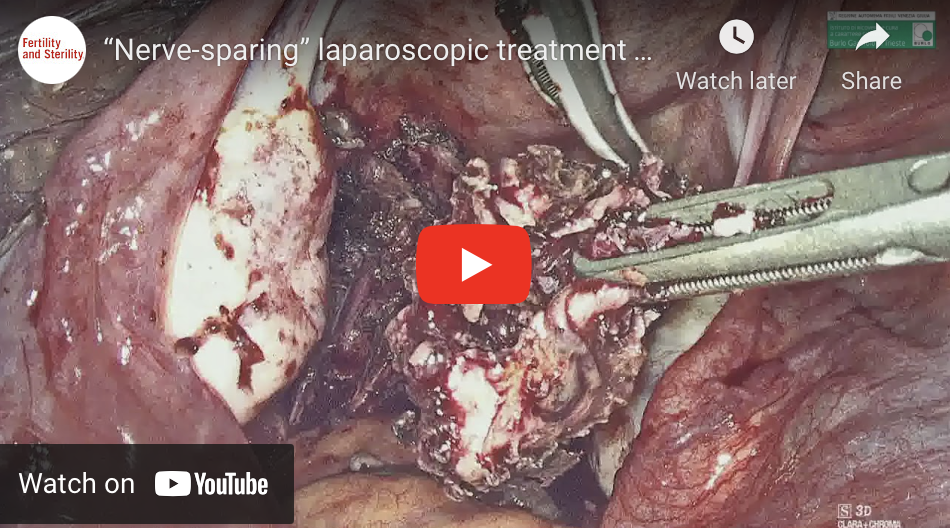 Laparoscopic treatment of parametrial pregnancy allowed the resolution of the condition with a nerve-sparing approach after medical therapy’s failure.