This 6-minute narrated video discusses the recent distinction of enhanced myometrial vascularity and arteriovenous malformation. The etiology, symptoms, imaging findings/interpretation, and management based on symptoms are reviewed in detail.
Fertility and Sterility
Editorial Office, American Society for Reproductive Medicine
Follow
Liked by Gao

To describe the etiology of arteriovenous malformations (AVM) and enhanced myometrial vascularity (EMV), and review updates in management for patients with retained products of conception (RPOC) associated with EMV through a case presentation.

A 6-minute narrated video discusses the recent distinction between EMV and AVM. The etiology, symptoms, imaging findings/interpretation, and management based on symptoms are reviewed in detail. As this represents a single case report, it does not meet the definition of research according to the regulations at 45 CFR 46.102(l); therefore, institutional review board approval was not required.

Eight weeks after suction dilation and curettage (D&C) for an incomplete abortion, a 28-year-old gravida 1, para 0 patient presented to an outside facility with RPOC, menorrhagia, and an acute decrease in hemoglobin. After uterine AVM was diagnosed, she was transferred to our facility for further care.

After transfer to our center, ultrasound demonstrated RPOC, with prominent internal vasculature containing peak systolic velocity >20 cm/s. A diagnosis of EMV was made. Magnetic resonance imaging confirmed a prominent serpentine vessel at the endometrium and RPOC within the uterine cavity (Fig. 1). Due to her anemia, she underwent uterine artery embolization (UAE) followed by suction D&C (Fig. 2). Hysteroscopy was performed before and after suction D&C and after curettage, a large vascular bundle was appreciated at the surface of the endometrium.

The patient presented to the clinic 2 weeks postoperatively with the resolution of abnormal uterine bleeding symptoms and a negative β-human chorionic gonadotropin test.

Management of patients with EMV is dependent on the extent of their symptoms. If significant bleeding is present, surgical management is required. Previous reports suggested that patients with EMV and RPOC should undergo UAE before D&C, but more recent studies suggest that D&C may be initiated without UAE, as EMV associated with RPOC may be a normal transient placentation phenomenon and have less risk of hemorrhage than previously suspected. However, in patients with significant preoperative bleeding and/or anemia, we propose that UAE should still be considered. Each patient requires individualized management based on symptoms, signs, imaging, and plans for future fertility. The ideal management of patients with RPOC and EMV remains to be determined.
Read the full text here.
Fertility and Sterility
Editorial Office, American Society for Reproductive Medicine
Follow 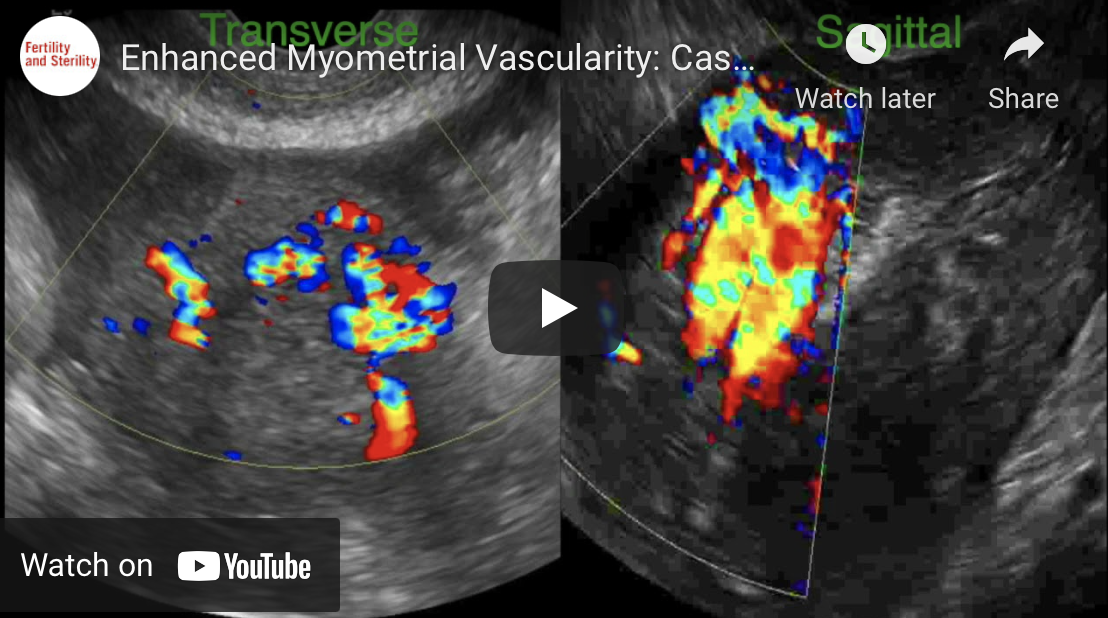 This 6-minute narrated video discusses the recent distinction of enhanced myometrial vascularity and arteriovenous malformation. The etiology, symptoms, imaging findings/interpretation, and management based on symptoms are reviewed in detail.