To describe a conservative cesarean scar pregnancy (CSP) treatment in a patient with the desire for future pregnancy. To date, there is no gold standard for the management of a viable CSP. There is a wide range of treatment options that include major surgery and minimally invasive procedures. Moreover, after a minimally invasive treatment, the gestational sac may be visible at ultrasound for >6 months. The described technique may be useful to avoid complications related to the use of energy with a large reduction in operative times.

Description of the technique with narrated video footage.

A 31-year-old woman with a previous cesarean section was referred to our clinic with lower abdominal pain. Transvaginal ultrasound revealed a gestational sac with a viable embryo located in the anterior isthmic region, suggestive of CSP at 9 weeks of gestation. Appropriate counseling describing the two diametrically opposite clinical management options was performed, and the patient decided to terminate the pregnancy. Informed consent was obtained from the patient.

Complete and conservative CSP treatment with the absence of surgical complications.

Conservative cesarean scar pregnancy treatment was performed successfully with primary local methotrexate injection followed, after 6 weeks, by hysteroscopic removal of the CSP remnants with the TruClear hysteroscopic tissue removal system. The first procedure lasted 6 minutes, whereas hysteroscopic removal of the CSP lasted 5 minutes. Both procedures were performed in an outpatient setting, and no complications were detected during and after the treatments. The patient reported good health at the 1-month follow-up visit, and the ultrasound showed an empty isthmocele (Fig. 1).

Primary local methotrexate injection followed by hysteroscopic removal of the CSP remnants with the hysteroscopic tissue removal system may be a valuable treatment for women who desire pregnancy in the near future. This combined technique may avoid potential complications, such as thermal-induced myometrial injuries or uterine perforation. Moreover, the operator has the possibility to perform an under-vision procedure with a lower incidence of intraoperative and postoperative bleeding. Because it does not reduce fertility/pregnancy rate, this technique should be a valid option in patients who desire future pregnancy.
Read the full text here.
Fertility and Sterility
Editorial Office, American Society for Reproductive Medicine
Follow 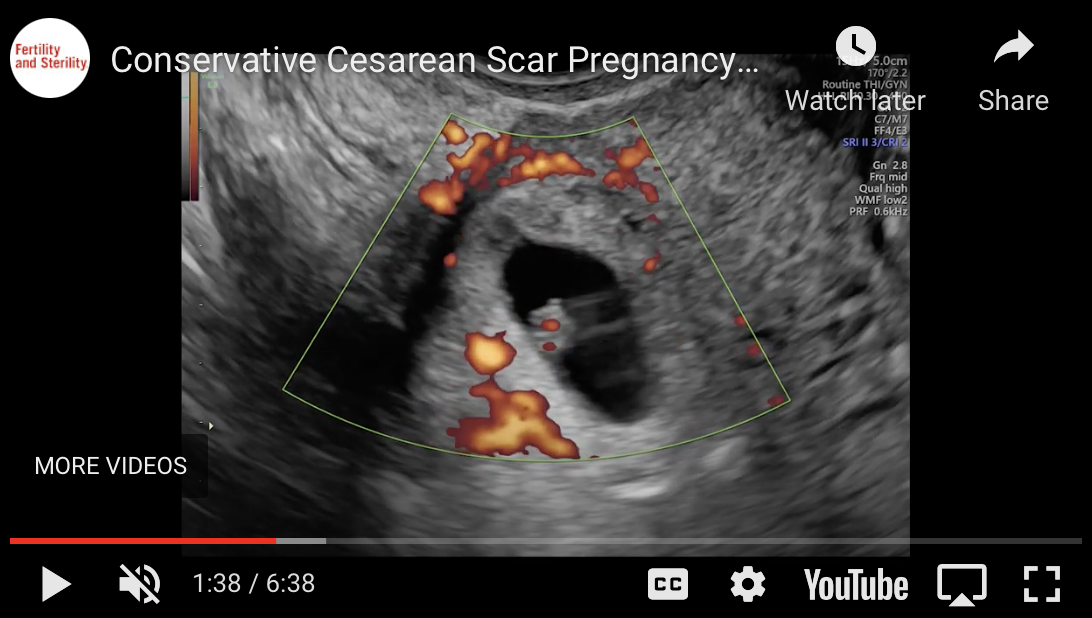 Primary local methotrexate injection followed by hysteroscopic removal of the cesarean scar pregnancy remnants with the hysteroscopic tissue removal system is a conservative and effective approach.