In this video article, a case of vaginoplasty using the uterine cervix in a patient with vaginal aplasia is shown. This could be a feasible technique in patients with a significantly distended uterine cervix.
Fertility and Sterility
Editorial Office, American Society for Reproductive Medicine
Follow
Like Liked by Mykhailo Medvediev
1

We present the case of a 28-year-old patient who was referred with a history of absent menstruation and vaginal intercourse was absent as well as abnormal development of the internal genitals. The patient underwent a laparoscopic cystectomy in 2012 because of an ovarian cyst and later that year underwent laparotomic supracervical hysterectomy with bilateral salpingectomy because of severe pain caused by a hematometra in their uterine remnant. In the period from 2013 to 2016, multiple pelvic ultrasound examinations revealed a fluid structure in the pelvis. By 2020, the size of the lesion had increased to 10 cm on average. A computed tomography scan and magnetic resonance imaging showed a mucinous lesion in the lower part of the patient’s pelvis resembling the cervical origin. No pathology of the urinary tract was found. A laparoscopic approach was chosen to achieve the two main goals of the patient—the possibility of vaginal intercourse and the treatment of the intraabdominal lesion. The procedure started with a vaginal step when the neovagina dissection was performed as in the classical Davydov technique up to the beginning of the dilated cervical remnant. Bilateral ureterolysis was performed laparoscopically to prevent ureteral injury. The peritoneum was widely dissected from both the anterior and posterior surfaces of the uterine cervix, which appeared as a large structure filled with typical cervical mucus. Partial dissection of the sacrouterine and ovarian ligaments on both sides was performed to mobilize the cervix. A transverse incision of the cystically dilated cervix in the cranial part was performed and the edges of the incision were brought down to the introitus of the vagina. The cervicovulvar anastomosis was fixed by separate sutures with Vicryl 2-0.

Surgical vaginoplasty using the preserved cervix. The details are explained in the Design section.

Restoration of the normal vaginal anatomy and function.

According to a literature search, this was the first published case of a successful neovagina creation through cervicovulvar anastomosis. Although different surgical approaches were widely discussed in previous publications of Fertility and Sterility, such as “Laparoscopic uterovaginal anastomosis in Mayer-Rokitansky-Küster-Hauser syndrome with functioning horn”, “Laparoscopy-assisted Ruge procedure for the creation of a neovagina in a patient with Mayer-Rokitansky-Küster-Hauser syndrome”, and “Evaluation of amnion in creation of neovagina in women with Mayer-Rokitansky-Küster-Hauser syndrome”, which were all variants of vaginoplasty with allograft, vaginal distention (Vecchietti procedure), or the use of native tissues (Davydov technique), our approach could be more feasible in the rare cases of preserved distended cervix because of less induced trauma when compared with that of cervical removal. This is because of the strong and lubricated nature of the cervical epithelium, which is already present and does not require time for epithelization.
Read the full text here.
Fertility and Sterility
Editorial Office, American Society for Reproductive Medicine
Follow

Pedro Acien
about 1 year ago

Dear authors, in our opinion the reported case is not a Rokitansky or MRKH syndrome. In Rokitansky syndrome there is a complete utero-vaginal agenesis although bilateral Müllerian remnants that may eventually contain a functional endometrium might be present. Such anomaly corresponds to group I of the ASRM classification-2021 (1). Whereas, it seems clear that this patient had a congenital cervico-vaginal atresia or agenesis with a present and functional uterine body and normal tubes. The cervical agenesis seems to have been distal and the patient had previously undergone a subtotal (supracervical) hysterectomy due to pain and hematometra, leaving the cervical canal in which a mucinous cyst was later formed and that thereafter served to cover the neovagina (2). So the reported case, should be classified in group II.

Additionally, we support that it is not necessary to perform hysterectomy in cases of cervico-vaginal agenesis with a normal functional uterine body. Utero-neovaginal anastomosis can be done as can be seen in (3) and some other reports, with "good" results and retaining patient´s capability for conception.

Finally, neovagina can also be done following the McIndoe technique and the use of a PLA prosthesis without the need of skin graft (4,5). 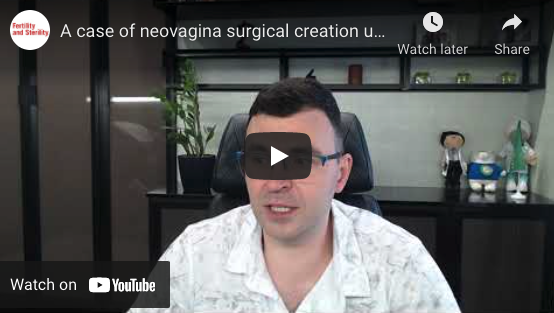 In this video article, a case of vaginoplasty using the uterine cervix in a patient with vaginal aplasia is shown. This could be a feasible technique in patients with a significantly distended uterine cervix.